Another elderly tug from the Groupe Océan fleet has been sold off. This time it is a World War II standard tug - one of the last TANAC types still in existance.

Built in 1945 as TANAC-V-220 by Standard Bridge in Trenton, ON it was one of hundreds built for civilian use overseas. Tugs completed after war's end carried the letter "V" in their names. A few of the tugs remained in Canada, and found work for government or were sold. This tug kept its name for many years but was renamed Peetee by McNamara Construction in the 1970s, and Bonnie JB when it joined Pitts Construction, which was later taken over by Bannister Continental. It was then sold to Arcade Dredging in Notre-Dame-de-Pierreville, QC where it was renamed Roxane D. 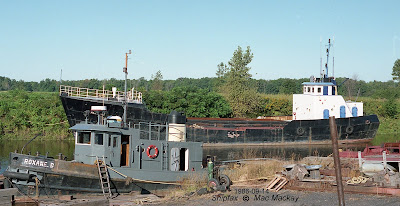 Groupe Océan eventually took over the dredging companies in the Trois-Rivières area and kept the tug in the fleet without change of name. 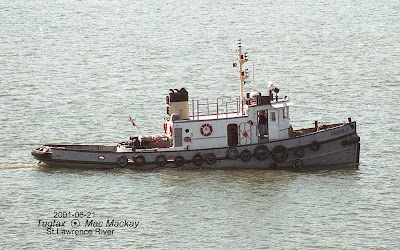 Roxane D. towing a dredge scow in the Trois-Rivières area of the St.Lawrence River.

The tug has now been sold privately as a  live aboard in the Sorel-Tracy area.