Another elderly tug has been removed from service to become a static display. Built by Canadian Vickers Ltd in Montreal in 1934 R.F.Grant has carried the same name for its entire career. 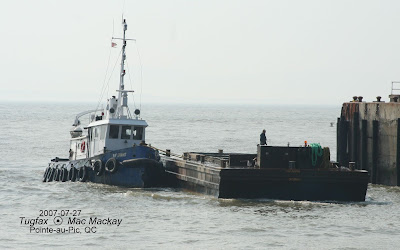 The tug was built for the Shawinigan Paper and Power Comapny, then moved to the St.Maurice Boom and Driving Co Ltd . It was used on the St-Maurice River timber drives. When that work was discontinued it was acquired by Three Rivers Boatmen (Les Remorqueurs de Trois-Rivières). They installed the new superstructure and a new engine.

Groupe Océan acquired the Trois-Rivières business and incorporated the tug into their fleet, moving it to Quebec City. A sister tug, Weymontichingue had a similar history, but was renamed Service Boat No.2 by Three Rivers Boatmen.

Groupe Océan has now given the R.F.Grant to Parc Maritime St-Laurent for use in a display at St-Laurent, Ile-d'Orleans where the tug often wintered over. It will be placed on the restored haulage ways at the old shipyard site as an example of the wintering vessels from past years.

REVISION: I finally got around to scanning a photo from my collection that gives a better view of this good looking small tug: 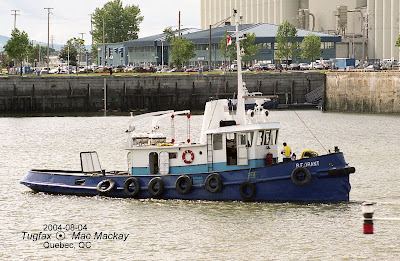