Panuke Sea - off into the sunset

The former Secunda Marine Services supplier Panuke Sea sailed from Sydney, Nova Scotia today November 14 as KYDY Sea under Panamanian flag. Giving a destination of Calderas, Dominican Republic, it is unclear if the vessel will see further service or if it is destined for scrap. In view of its age and years out of service, the latter seems more likely. 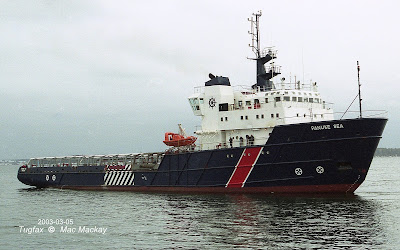 Rebuilt from the 1984 era Neftegaz 14, it has been covered in this blog several times. Most recently: