Old but indestructible, or When I'm sixty-four

This blog has contained too many notices of old tugs going to the scrappers recently. Tug companies may be cleaning house as they have been carrying worn out vessels on their rosters for too long. However a few durable tugs are still soldiering on at relatively unheard of ages. One of those is the R.J.Ballot, which has apparently answered the Beatles question "Will you still need me....when I'm sixty-four." 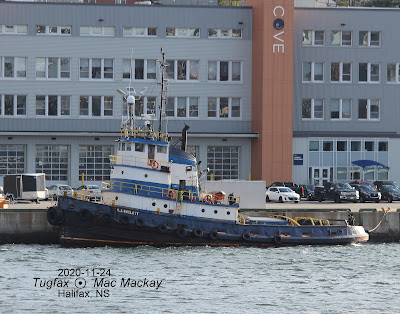 R.J.Ballott at the former Coast Guard base, now the Centre for Ocean Ventures and Entrepreneurship (COVE) in Dartmouth.

Foundation Maritime, that legendary Halifax based towing company, built up a rag tag fleet during World War II. Some of those tugs were replaced by war emergency tugs in the late 1940s, but by the mid 1950s they still had several underpowered and steam driven boats.

When the newly developing Labrador iron ore mines came into production, new port facilities were built at Sept-Iles, QC that could handle the largest of a new breed of bulk carriers. Along with nearby Baie Comeau, the ports required tugs with power and heft. Foundation went to Davie Shipbuilding in Lauzon (now part of Lévis), QC for what eventually turned out to be nine new tugs. Delivered in the years between 1956 and 1963, and all powered by Fairbanks Morse engines (and all but one, single screw driven) they have provided remarkable service for a variety of owners.

It is notable that of those nine tugs, three were sold foreign and likely scrapped, and all but one of the rest remain in daily service in Canada. * - see below

The first of what were big ship berthing tugs at the time, is in Halifax now, having transitioned to long distance towing work. R.J.Ballott arrived from Makkovik, Labrador, via St. Barbe with the barge Kaligak loaded with construction equipment.

It is the same barge that R.J.Ballott towed out of Halifax on October 3, 2019

The tug, built in 1956 as Foundation Victor has had a long career with several owners as Point Victor, Kay Cole and Jerry Newberry and is still going strong at 64 years of age. It has been noted in this blog many times. Enter the name in the search box, or for a complete record see: R.J.Ballott 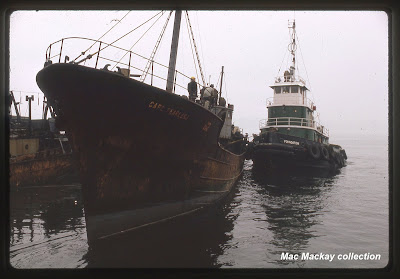 * Foundation Valiant, later named Point Valiant (i) and André-H. was broken up in recent months at Quebec City. See this recent post