Battler to the Rescue 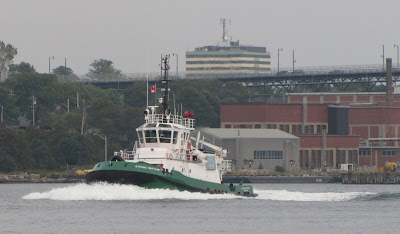 The new tug Stevns Battler sailed from Halifax September 11 for delivery to Denmark, via the Azores.
She arrived in Ponta Delgada September 22, but on the way had a bit of luck. The Danish cargo vessel SDK Italy, on trip from Cristobol to Rotterdam via Maracaibo, had an engine breakdown in the mid-Atlantic. Stevns Battler diverted to the ship and towed it into port.
Not strictly a salvage job perhaps, but certainly a towing job. The owner is reported to have said it helped pay for some of the fuel on the delivery trip.
SDK Italy is a relatively small ship of some 2657 grt, built in 1982, so was probably an easy tow.
Posted by Mac at 9:44 PM