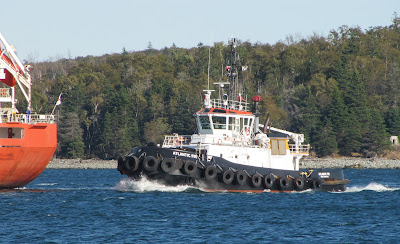 Atlantic Fir stood by off Ives Knoll for the arrival of the tanker North Fighter this afternoon. When the ship came up the tug ran along her starboard side, rounded up astern and came alongside her port quarter in a stiff breeze, with a bit of spray to enliven the deck hand's day. They berthed at number 4 oil dock.
Fir was built in 2005 and is a 5,050 bhp azimuthing stern drive tug with firefighting capability.
She is the third tug of the name to be built at Georgetown, PE for Atlantic Towing. The other two were sold abroad.
Atlantic Fir#1 a 4,000 bhp firefighter, was sold to Johannes Ostensjo of Norway in 1997. Renamed Alex, it has since been acquired by Lee Towage of Cork, Ireland, but is still managed by Ostensjo.
Atlantic Fir#2 , built in 1998, was sold in the same year to Kotug of Rotterdam and renamed SD Jacoba. [SD for Stern Drive]
Posted by Mac at 8:55 PM