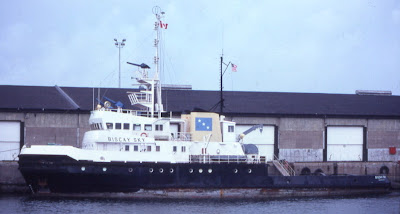 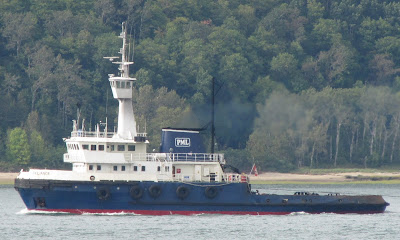 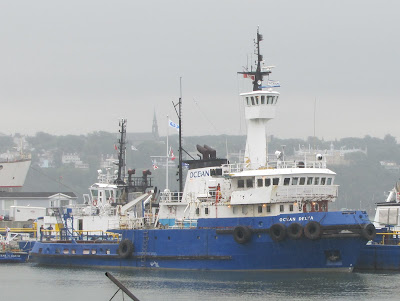 3. Ocean Delta in Quebec City August 16, 2010.
The Greek owned tug Ionian Pelagos is due in Montreal October 3 to tow the laker Algoisle to Turkey for scrap. The current name of the tug may not sound familiar, but it was a caller in Halifax, and has some other interesting connections.
This tug was one of several built to the Ulstein UT 505 design, an anchor handling offshore tug, for long distance towing and salvage. Ulstein, in Hatlo Norway, was a busy yard, in the 1970s just beginning to take advantage of the North Sea oil boom. They have since become a giant world player, owning Rolls Royce, Bergen engines and Ulstein azimuthing thrusters among other things. Not only does Ulstein build ships, it exports its designs to other yards to build under license (and strict control.) All four of the tug/suppliers and the supplier now under construction at Halifax Shipyard are Ulstein designs, and incorporate Ulstein built propulsion packages and many other components.
Two of the early Ulstein 505s are now serving in Canada as Ocean Delta (ex Capt. Ioannis S-99, Sandy Cape -80, Sistella-78) for Groupe Océan and Reliance (ex Atlantic Cedar -02, Irving Cedar -96, Sinni -81) for Purvis Marine. Both were built as part of an order for three tugs for for International Transport Contractors (ITC) in 1972, 1973 and 1974. This generation of 505 were rated at 5,000 bhp.
A second generation was built in 1977, and were named Biscay Sky and Biscay Star by Biscayan Towing and Salvage, and placed under the management of the Dutch firm of Wijsmuller. These were rated at 7,040 bhp, and had some slight improvements and modifications. They were fitted with two Nohab Polar engines of 3520 bhp each driving a single CP prop in a fixed nozzle. They also have 400 bhp bow thruster.
Ulstein sub-contracted the building of Biscay Sky to the Molde shipyard in Hjelset, and they completed the tug in 1977. Both tugs were sold to the USSR in 1979 with Biscay Sky becoming Zubr [Zebra] and operated for Black Sea Shipping.
In 1998 the Italian Moby SpA bought Zubr and renamed her Mascalzone Oceanico. She was fitted with anti-pollution gear, in the form of a plant on deck and a boom boat.
The forward thinking Greek towing and salvage concern Megalohari Salvage & Towage SA have now acquired the tug, renamed her Ionian Pelagos and refitted her for towing and salvage.
Now back to her visit to Halifax,. This occurred when she was still fairly new, and was named Biscay Sky. She arrived in Halifax May 30, 1979 and sailed June 1. She was apparently travelling with the Wijsmuller tug Noord Holland, bound across the Atlantic. Noord Holland bunkered in Halifax, but Biscay Sky did not as far as I can tell from my records. However she did stop at pier 34 long enough for a picture!
She looks essentially the same today, and there are differences with the earlier UT 505s. She has two funnels instead of the single funnel and a slightly raised forepeak. She also has a winchman's/aft control station on her boat deck.
Reliance (shown for comparison) and Ocean Delta both have an elevated wheelhouse fitted to permit barge pushing.
Posted by Mac at 9:39 PM