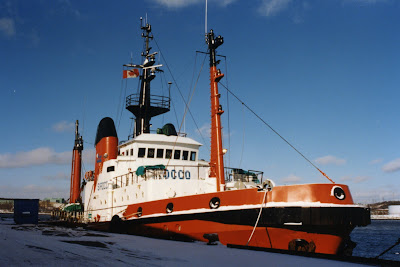 1. Sirocco in Halifax January 19, 1996. She had delivered a barge to Bull Arm, NF and was on her way to the Azores, but was hanging around on spec for about a week, in case a salvage job came up. 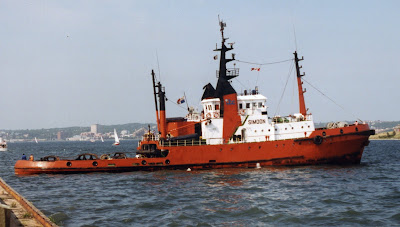 2. Simoon in Halifax September 4, 1999. She left the following day towing a barge carrying the Venture gas field topside structure, which was to be placed at sea by the crane Saipem 9000.

The tug Sirocco got underway yesterday from Montreal, towing the retired Great Lakes bulk carrier Agawa Canyon to the scrappers in Turkey. The former Canadian navy tug Vigilant 1 (former Glenlivet II) is stern tug down river probably as far as Cap-aux-Oies, where the river widens out. This is the first of three similar tows scheduled this fall. It is reported that the tug Simoon is due in Montreal in ten days or so.
These were familiar tugs in Halifax over the years, towing barges with oil rigs aboard.
Owners ITC (International Towage Contractors) of the Netherlands built five tugs of this class between 1976 and 1978: Sirocco, Shamal, Suhaili, Simoon, Solano and Sumatras. A seventh near sister Santania (ex Shoei Maru No.82) was added soon after it was built. They were rated at 110 tonnes bollard pull at 8440 bhp. They are all named for winds (the sibilant "s" seems to be a common feature of wind names in many languages.) Santania and Shamal were sold in 1998, and Solano in 2004, but all still soldier on.
They are magnificent go-anywhere tugs, that have figured in many important tows and salvage operations. Now relegated to second string status by ITC, they can still perform despite their age, and relatively low horsepower compared to newer tugs.
The tugs have been around for a long time, so there is lots of info about them on the web, including these two videos:
www.imcbrokers.com/blog/overview/p/detail/itc-tugs-sumatras-and-sirocco-towing-a-vlcc
www.youtube.com/watch?v=d_PDF9JOB9U