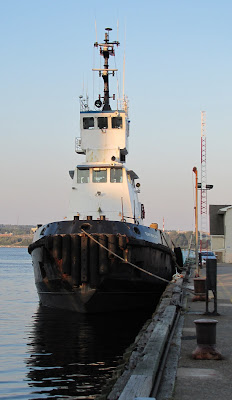 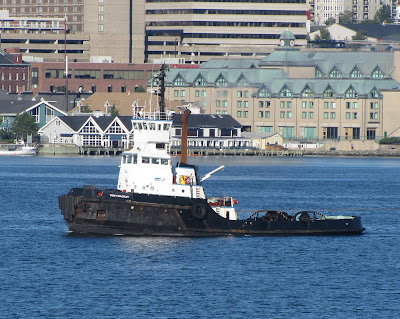 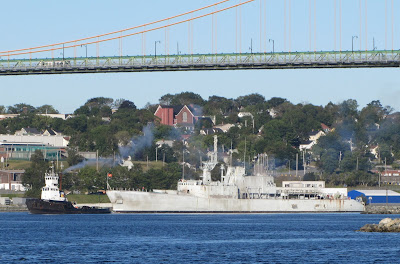 3. Tony MacKay giving some power to get underway with Fraser, September 6. 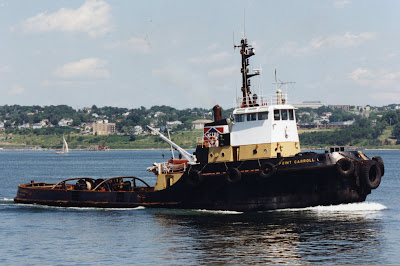 
The McKeil tug Tony MacKay returned to her old stomping grounds this past weekend. She was set to tow out the old naval vessel Fraser when a court challenge and Hurricane Earl intervened to delay the departure.
The court challenge, by parties attempting to preserve the destroyer escort, failed but Hurricane Earl held things up until Monday.
Meanwhile Tony MacKay tied up at the Svitzer Canada dock -her old home when she was Ectug's Point Carroll.
Built in 1973 for coastal towing and tanker berthing at Point Tupper and Come-by-Chance, Point Carroll and sister Point Spencer, were soon put out of work when both refineries were closed. The sisters and four fire tugs were laid up in Halifax where the owners Smit & Cory International had set up Eastern Canada Towing. All the other tugs were eventually returned to Smit & Cory, but Point Carroll remained in Canada, and was put to work by Ectug doing some ship berthing, ocean towing and salvage tows. She also worked with cable laying, towing a trenching plow and pushed oil barges. Eventually Ectug opted to sell the tug, since her single steerable prop and modest horsepower limited her effectiveness.
McKeil Boat Works Ltd of Hamilton, ON (known as McKeil Marine) bought her in 2001 and put her to work in barge service. She was heavily modified with an elevated wheelhouse and extended exhaust stack.
It is in this guise that she arrived in Halifax. She had to go to anchor during the hurricane, then on Monday morning she moved to navy Jetty Lima to pick up Fraser, and sailed for Port Maitland, ON.
[see Shipfax for more on Fraser]
Posted by Mac at 10:39 PM