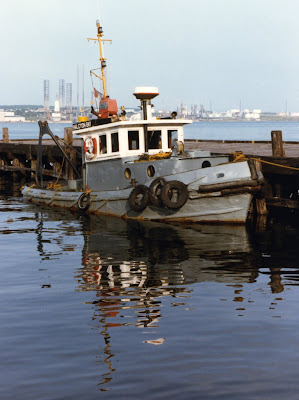 1. Halcyon Bay in DPW colours at Queen's Wharf in 1986. She is fitted with an A-frame for bottom leveling. 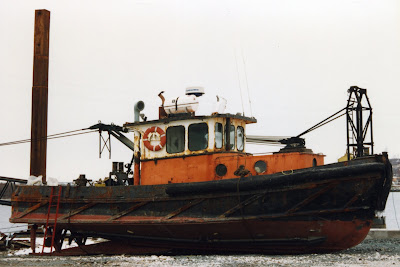 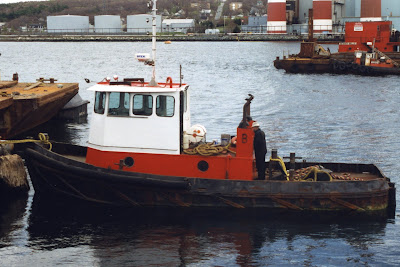 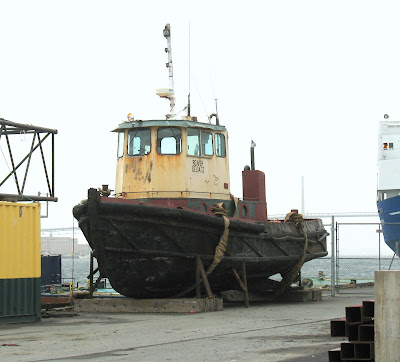 
McNally Construction's truckable tug Beaver Delta II has been a fixture off an on in Halifax since the 1980s.
Built in 1959 in Vancouver as Halcyon Bay, the tug was one of a fleet of dredge tenders built for the Canada Department of Public Works. Built to a west coast design, with centre cabin, she ended up in Nova Scotia. The tug remains registered in New Westminster, BC.
When the DPW wound down its fleet, Beaver Marine stepped forward and bought the tug, renaming her Beaver Delta II in 1989. They ran her pretty much as built until 1996 when they carried out a major refit in Yarmouth. She emerged with a forward wheelhouse, and twin funnels. She is twin screw vessel with 320 bhp.
McNally Construction acquired Beaver Marine and repainted the tug in their green colour scheme.
On September 3 the tug was lifted out of the water and placed on pier 9 during the passing of Hurricane Earl. Once he was gone by the tug was lifted back into the water alongside the scow Beaver Kay at pier 9. She appears to be in the midst of a well needed repaint and repair job.
Posted by Mac at 8:56 PM