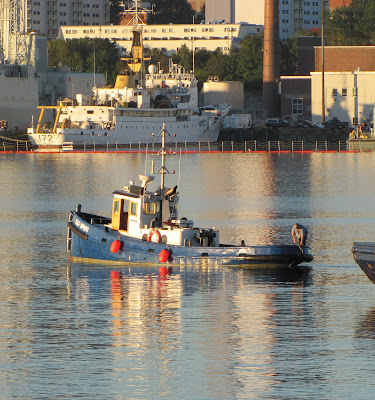 1. Gulf Spray on September 6, resecuring barges after Hurricane Earl. The barges had been moved to pier 9 before the storm, then returned to anchorage off LeGrow's base. In the background CFAV Quest at HMC Dockyard, behind the force protection boom. 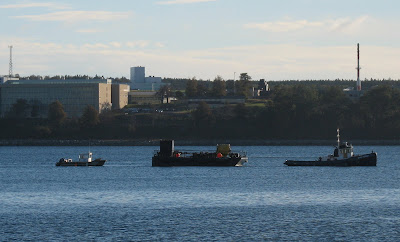 2. September 16. The veteran tug Gulf Spray proceeds down the harbour early this morning to the cruise ship Maasdam. It is towing the barge O/D Gavin David and is assisted by the outboard powered tug Harbour Diver. Once alongside the ship the barge will pump off waste.

Gulf Spray also handles garbage removal from cruise ships. International garbage is incinerated and does not enter the normal municipal garbage waste stream in Halifax.
Gulf Spray was built in 1959 in Pictou, Nova Scotia, by the now long defunct Ferguson Industries Ltd shipyard. The tug was used by the yard, but was built to a similar design to several other tugs built there for the Canadian Department of Public Works. These in turn were an enlarged version of the navy's Ville class tugs built during World War II.
Gulf Spray was laid up when the shipyard closed. It was rebuilt a few years ago, and now works for LeGrows Marine in Halifax.
Posted by Mac at 3:49 PM