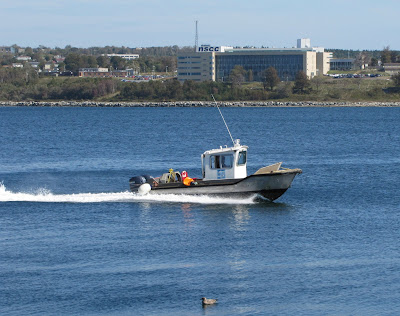 Some would say that it isn't a tug - it has outboard motors. Some would say it is a work boat or a crew boat.
Well it is all of these things, and it is called Harbour Diver. It is a jack of all trades for LeGrow's Marine and is used to handle scows, run crews around and variety of other chores. It can also cover the distance between A and B with suitable alacrity if needed.
What settles it for me, is that she has a towing bit - so she's a tug. (It is mounted on an arch to clear the motors.)
Posted by Mac at 8:12 PM