Azimuthing stern drives are certainly here to stay. Their great maneuverability allows to them to direct their thrust in any direction, with minimal loss of power. All the harbour tugs operated by Atlantic Towing Ltd in Halifax have ASD, and most tugs being built for harbour work today are either ASD or cycloidal (Voith-Schneider.)
If there is a downside to ASD and cycloidal it is that they are sophisticated, expensive and when they break down or are damaged they can be are costly to repair.
There are still lots of conventional propeller tugs around, and so it was good to see a couple this summer on the ways at at les Industries Océan at Ile-aux-Coudres.
The yard is owned by Groupe Océan and builds and refits tugs for the parent group. 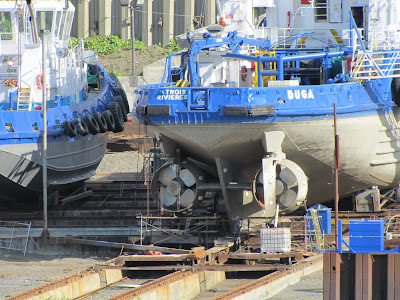 1. On August 27 Duga is shown with her port nozzle and rudder removed. 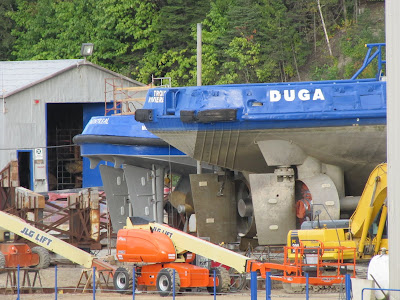 2. On August 20 Duga and Océan Golf are side by side on the ways, with rudders and props in place. 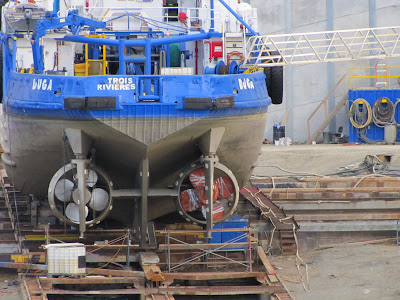 3. On August 20 Duga has her starboard prop wrapped for protection. Note the bar between the two nozzles. 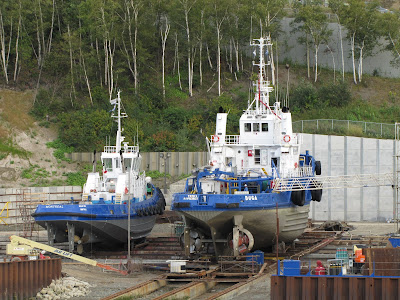 4. Océan Golf (left) and Duga on the ways at Ile-aux-Coudres 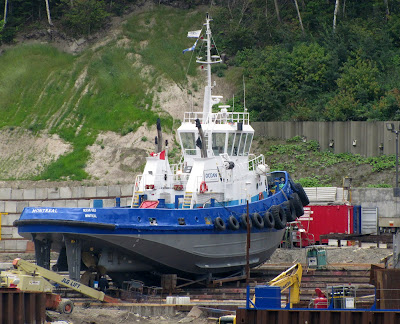 5. On August 4 Océan Golf was alone on the ways, one of her open props has been removed.

Océan Golf was built by P.K.Harris of Appledore, North Devon, UK as Stranton, for British owners. However it was purchased by McAllister Towing of Montreal before delivery and towed to Canada by Salvage Monarch. It was renamed Helen M.McAllister and served the port of Montreal. Rebuilt and re-engined in 1997, it was renamed Océan Golf. The tug was built with the patented hydroconic hull form.
Thanks to her many years in largely fresh water, that hull is in remarkably good condition. She is fitted with twin open screws. You will note the ice knives over the rudders.
She now serves the port of Sorel-Tracy, QC.

Duga was built in 1977 by Rolf Rekdal AS in Tomrefjord, Norway as an anchor handling tug. It has two 7 cylinder Wichman main engines of 2100 bhp each. These drive two controllable pitch screws in fixed nozzles. After service in the Arctic and Beaufort Sea, Duga was acquired by Three Rivers Boatmen / les Remorqueuers de Trois-Rivières, which was subsequently acquired by Groupe Océan. She is fitted with a bow thruster and has ice knives above her rudders.
A powerful towing and ship berthing tug, she is also now based in Sorel and works year round. notice the lack of rolling chocks, which would be damaged in heavy ice.
Posted by Mac at 9:47 PM