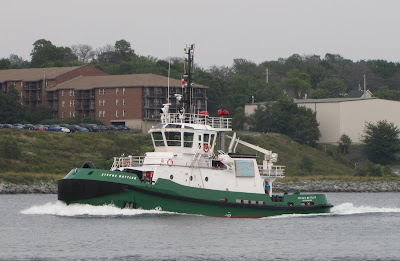 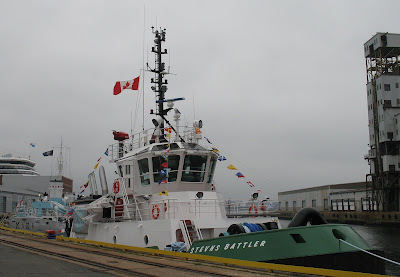 Nordane Shipping is about to take delivery of its latest tug from Eastisle Shipyard. Stevns Battler is in Halifax for handover, having completed trials. This is the seventh essentially identical tug built by Irving Shipbuilding for the Danish operator. The last delivery was Stevns Breaker, completed earlier this year. These were the first two to delete the prefix "Ice" from their names. Iceflower (i and ii), Icequeen (i and ii) and Icecap have been the previous names.
Stevns Breaker is rated at 5,000 bhp and is ice-strengthened and fitted with firefighting capability. She is a typical azimuthing stern drive tug, built from an orginal design by Robert Allen Ltd, and upgraded by Irving over many years.
Top photo shows the tug at speed in the harbour as she was heading for pier 9 to to shelter from Hurricane Earl, on September 3.

Lower photo, taken today, shows the tug tied up at pier 24 with signal flags hoisted in preparation for handover ceremonies. In the background is the preserved World War II corvette Sackville - the veteran of the Battle of the Atlantic.
Posted by Mac at 8:31 PM